A Story of Sushi Lil' Ninja

I've laid a couple heavy posts out there recently. So I figured maybe it's time for a lighter post - a post about my kitten, Sushi, the Lil' Ninja. Because I will talk about cats every chance I get. #futurecatlady.
He's six (almost seven!) months old. He was found as a street kitten, but we (my roommates and I) suspect he might be partially Russian Blue because, well, just look at his beautiful furs and big green eyes.
How did we acquire such a love? Um ... well ... long story short, it took an epic game of phone tag, furious tears, prayer, an act of God, and a frantic cab drive through the rain. Maybe I'll detail the rest in another post.
Anyway, Russian Blues are known for being a very intelligent breed. Apparently Sushi likes to use his smarts to sneak up behind my roommates and me, surprising us when we trip headlong over a cat. Hence the middle name, Lil' Ninja.
He also loves to sleep when he's not hyper.
Which is ... um ... rare. Hyper is how this kitty lives. If no one pays him attention, he squeaks his sorrows (still can't form a proper meow) and climbs on furniture and runs around and around and around! until we play with him.
And he likes to cheese out quite a bit after his catnip.
And eat. Oh yes, this kitty loves to nom on anything and everything he can. Except I wonder if offering him sushi enables cannibalism? 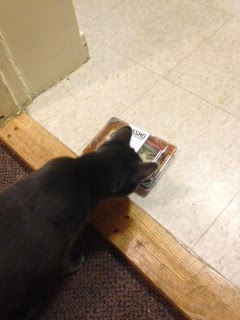 He also loves to cuddle.

And, finally, he has given me the face I'd like to adopt every time I get another assignment at the end of the semester: 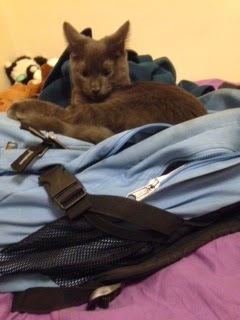 Thanks for reading! And by that I mean, for letting me gush and gush about my kitten. I may be worse in person.
Did I mention I'm a #futurecatlady?